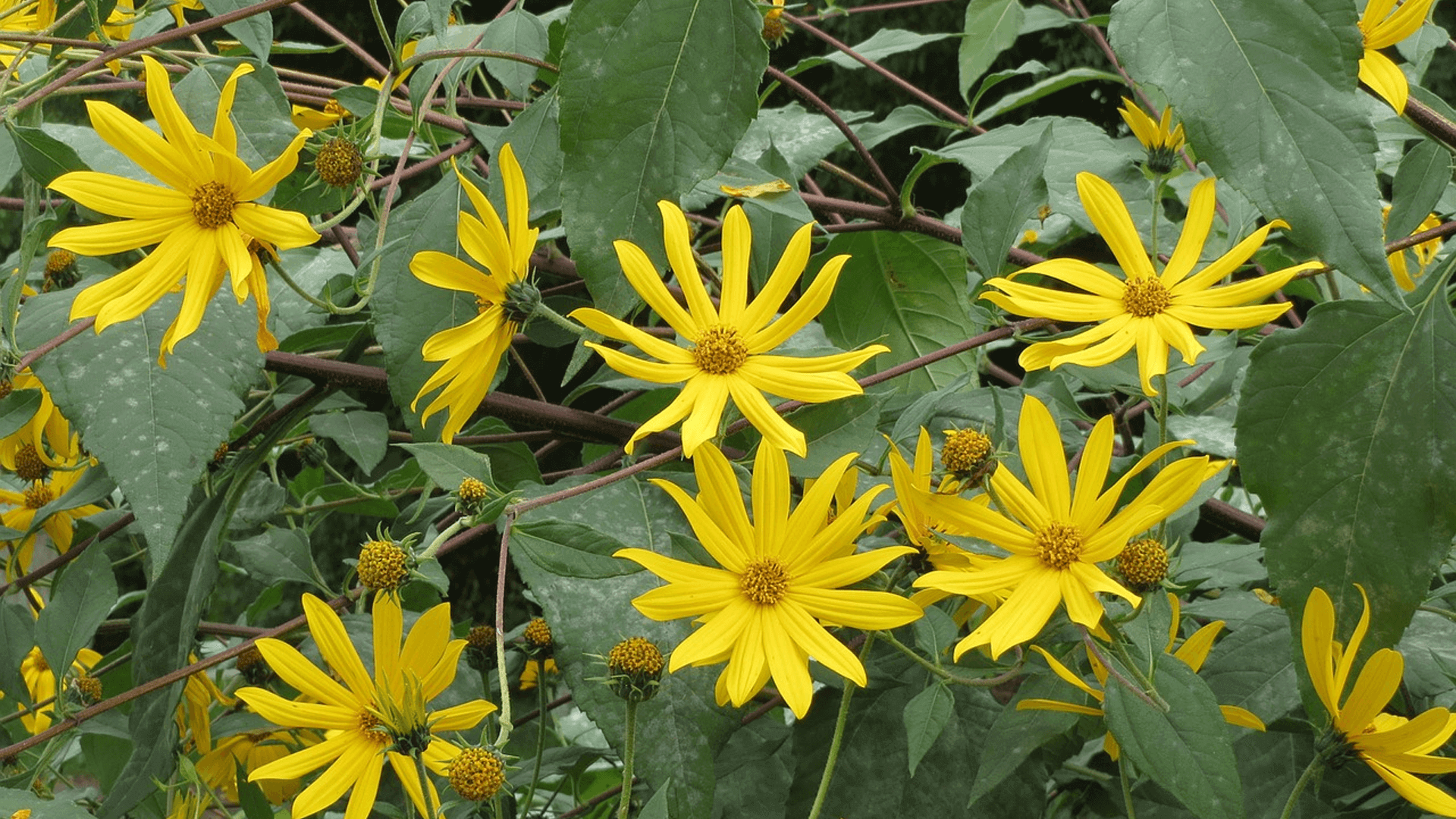 The Jerusalem artichoke (Helianthus tuberosus) is a native North American sunflower that is grown for its tuberous roots. Native to virtually every state in the U.S. and the eastern half of Canada, the Jerusalem artichoke, or sunchoke, is an easy-to-grow vegetable in most of North America and in many places around the world. It grows so well and so prolifically, in fact, that it can become invasive in the right environment and is sometimes considered a weed. Notwithstanding those issues, the Jerusalem artichoke has a long history of providing nourishment to settlers, explorers, and native peoples. Lewis and Clark and their Corps of Discovery consumed the tuber as they explored the Louisiana Purchase. It was probably Native Americans who spread the plant across the continent through trade and cultivation of the tubers. Native Americans introduced the Jerusalem artichoke to European settlers, who took it back to the Old World. The name Jerusalem artichoke is a corruption of the Italian word for the tuber and has nothing to do with the historic city in Israel. The sunchoke was popular in Europe until potatoes were accepted as safe in the mid-1700s, and it remains one of the only North American native plants to be classified as a vegetable.

Unlike potatoes, the Jerusalem artichoke tuber does not contain starch and converts to natural sugars when it is metabolized by the body. The plant itself looks like a small wild sunflower, with long gangly stalks that sometimes fall over under the weight of the flowers. Deer and other wildlife enjoy the foliage and the tubers. When raw, the sunchoke has a taste similar to water chestnuts, with sweet, crisp flesh. The flesh is similar in taste and texture to that of potatoes when the tuber is boiled or roasted, with a slightly nutty flavor. The tuber contains vitamin C, potassium, and a good quantity of iron.

Most sunflowers are planted by seed; the Jerusalem artichoke, however, is planted by tubers. The tubers are sold in some supermarkets, where they can be purchased and planted, or they can be ordered through some gardening catalogs and websites. The tubers are planted lengthwise in the ground 4–5” deep, spaced 16” apart. They should be planted in full sun in an area that can be mowed and cultivated if the plants start to become invasive. The Jerusalem artichoke does best in well-drained soil with a neutral pH, but they will grow in virtually every soil type. A 25-square-foot planting can yield as much as 100 pounds of tubers. The blooms of the plant, which bloom from late summer to fall, are bright and beautiful, making the plant attractive in a landscape.

The Jerusalem artichoke requires very little maintenance. The plant will try to escape cultivation, so the “escapees” should be mowed or pulled up to prevent the plant from becoming invasive. When the plants are young, keep the area weeded; as the plants get bigger, they will shade the weeds, reducing or eliminating them. Early in the season, as the plants are getting established, the soil should be kept moist with either rainfall or irrigation. Once the plants are established, they are drought tolerant, needing water only during extended dry periods. Sunchokes don’t require any fertilization, though they produce higher yields in soil with plenty of organic matter. They do benefit from a layer of mulch applied around the base of the plants once the plants begin growing.

Sunchoke tubers can be harvested any time by digging up the plant and removing the aboveground portion. When the tops of the plants die back after the first freeze, the tubers should remain fresh in the ground and can be harvested throughout the winter. The tubers remaining in the ground will start growing the following spring. A layer of mulch placed over the tubers during the winter will protect them and allow a good crop next season. To encourage larger tubers and to reduce the plant’s tendency to become invasive, cut off the flowers when they bloom and enjoy them indoors. This allows the plant to use its energy to produce larger, tastier tubers. Jerusalem artichoke tubers have rougher, more uneven skin than potatoes. For this reason, they take longer to clean and sometimes require intense scrubbing to remove the soil caked on the tubers. Once removed from the ground, the tubers will keep for seven to ten days in the refrigerator.

Sunchoke tubers can be eaten raw or cooked. Once clean, the tubers do not have to be peeled. They can be chopped and added to salads, boiled, roasted, or sliced and eaten raw. Inulin, the sugar contained in the tuber, is a type of fructose that enhances the growth of microflora (bacteria) in the gut. Sometimes the Jerusalem artichoke is recommended for diabetics, since it is similar to potatoes but does not contain starch. Here’s an excellent recipe for tasty roasted Jerusalem artichokes: Ingredients: 1 pound Jerusalem artichoke tubers (sunchokes) ¾ cup olive oil 2 tablespoons dried thyme 1 tablespoon minced garlic A dash of sea salt (to taste)